I am reminded of a Canada Day 40 years ago when I returned to working as a stagehand/stage manager for the first time in over two years.

A nasty car accident had knocked me out of the workforce and I was preparing to re-enter doing what I so enjoyed.

I was partnered that day with a fellow who became a lifelong friend: Gilles Dumaine, who was operating the front of house PA.

Our venue was the Franco-Manitobain Culturel Centre in Saint-Boniface.

Beginning at 12 noon we would put onstage 20 francophone acts from the local community.

We had been hired by the organisation (CCFM) but were given scant details on the technical requirements of the groups – in fact nothing but the names of the groups and the times they were to grace the stage.

Well, how do you manage microphones, di’s, amplifiers, keyboards, drums – in fact the complete input lists of the bands to ensure smooth and rapid transitions to keep the days events moving along to please the public?

Gilles and I contacted the person responsible (I cannot remember their name) and their response was a non comital shrug of the shoulders and a unintelligible mmmm…I dunno.

Honestly I wanted to throttle the person but … Gilles prevail and said ‘let”s just do the input lists ourselves’. So the evening before the event we sat in the Le Foyer at the CCFM and went through the list of groups most of whom we knew and had already seen on stage.

We put in over 2 hours preparing the list and checking it twice rewarding ourselves with an extra beer for our efforts.

The next morning the big day was upon us and despite some infuriating interference early in the morning from another head up their ass employee of the CCFM we were set and ready to go for the opening at 12 noon.

Our stage continued nonstop until 10 PM that night without nary a hitch:  ‘what do you mean you forgot your amp?’.

The groups were appreciative of getting on and off without much hassle and having the opportunity to perform before a large crowd.

Gilles and I were content in the fact that we did our best and it worked out well and our method became the template for years to come for La fête du Canada au CCFM. Here’s to you Gilles for a great day 40 years gone by. 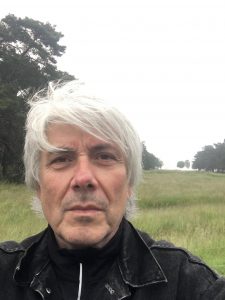